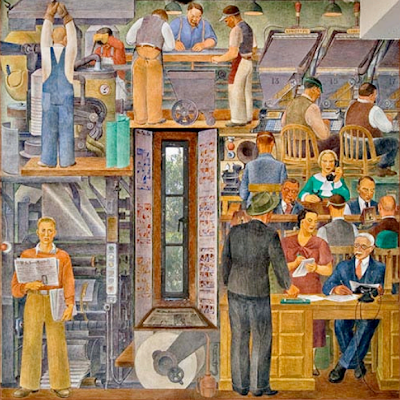 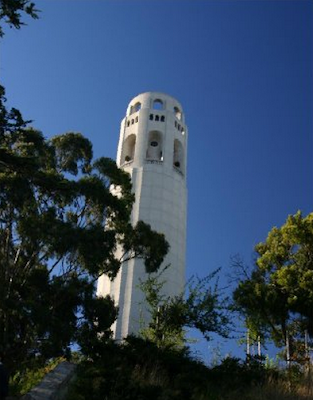 COIT TOWER--Coit Tower, a slender white concrete column rising from the top of Telegraph Hill, has been an emblem of San Francisco's skyline since its completion in 1933, a welcoming beacon to visitors and residents alike. Its observation deck, reached by elevator (tickets can be purchased in the gift shop), provides 360-degree views of the city and bay, including the Golden Gate and Bay bridges.

The simple fluted tower is named for Lillie Hitchcock Coit, a wealthy eccentric and patron of the city's firefighters. Coit died in 1929, leaving a substantial bequest "for the purpose of adding to the beauty of the city I have always loved." The funds were used to build both the tower and a monument to Coit's beloved volunteer firefighters, in nearby Washington Square. The tower was designed by the firm of Arthur Brown, Jr., architect of San Francisco's City Hall.

Blog Editor’s note: Contrary to popular belief, Coit Tower was not designed to resemble a firehose nozzle. Nearby is a statue of Christopher Columbus looking off into the direction of the Pacific, an ocean he never saw. Maybe the statues should have been switched. Move the firefighters statue from Washington Square to Coit Tower’s grounds and send the statue of Columbus to Washington Square, which is located on Columbus Avenue. Just an unfunded thought.

The murals inside the tower's base were painted in 1934 by a group of artists employed by the Public Works of Art Project, a precursor to the Works Progress Administration (WPA), and depict life in California during the Depression. When violence broke out during the 1934 longshoremen's strike, controversy over the radical content in some of the panels became quite heated. Some of the most controversial elements were painted over, and the tower was padlocked for several months before the frescoes were finally opened to the public in the fall of 1934.

Telegraph Hill takes its name from a semaphore telegraph erected on its summit in 1850 to alert residents to the arrival of ships. Pioneer Park, which surrounds Coit Tower, was established in 1876 on the former site of the telegraph station. As you wander the trails that wind around the tower and down the hill, you may hear the raucous chatter of the neighborhood's most famous (and noisiest) residents, the flock of parrots featured in the 2005 film "The Wild Parrots of Telegraph Hill."

Other: An effective and fascinating PDF pictorial tour of the WPA murals inside Coit Tower may be found by placing the following URL in your search engine.
http://www.teachingamericanhistory.us/documents_2/summer_09/Coit%20_Tower_Murals.pdf