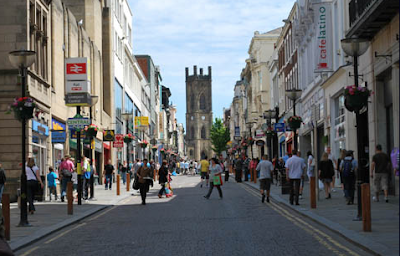 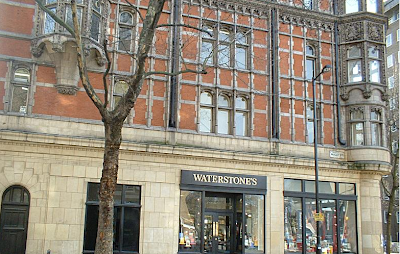 ON THE EDGE OF TIME: Guest Blog by Tim Swartz

Time is a funny thing. There never seems to be enough -- yet there is an infinite amount. Time slips through moment upon second into eternity past; yet present, to begin the future.

Time is thought to be unstoppable in its relentless push towards the future. Humans perceive themselves as bound up in time as an insect in amber. Forever imprisoned and forced to reconcile with the regularity and inevitability of change. The past is gone -- the present, fleeting -- and the future is unknown. Or is it?

If a Merseyside policeman by the name of Frank was asked, he may have an entirely different opinion on the subject of time.

On a sunny Saturday afternoon in July of 1996, Frank and his wife, Carol was visiting Liverpool's Bold Street area for some shopping. At Central Station, the pair split up; Carol went to Dillon’s Bookshop and Frank went to HMV to look for a CD he wanted. As he walked up the incline near the Lyceum Post Office/Café building that lead onto Bold Street, Frank suddenly noticed he had entered a strange "oasis of quietness."

Suddenly, a small box van that looked like something out of the 1950s sped across his path, honking its horn as it narrowly missed him. Frank noticed the name on the van's side: "Caplan's." When he looked down, the confused policeman saw that he was unexpectedly standing in the road. The off-duty policeman crossed the road and saw that Dillon’s Book Store now had "Cripps" over its entrances. More confused, he looked in to see not books, but women's handbags and shoes.

Looking around, Frank realized people were dressed in clothes that appeared to be from the 1940s. Suddenly, he spotted a young girl in her early 20's dressed in a lime-colored sleeveless top. The handbag she was carrying had a popular brand name on it, which reassured the policeman that maybe he was still partly in 1996. It was a paradox, but he was relieved, and he followed the girl into Cripps.

As the pair went inside, Frank watched in amazement as the interior of the building completely changed in a flash to that of Dillon’s Bookshop of 1996. The girl turned to leave and Frank lightly grasped the girl's arm to attract attention and said, "Did you see that?"

She replied, "Yeah! I thought it was a clothes shop. I was going to look around, but it's a bookshop."


It was later determined that Cripps and Caplan's were businesses based in Liverpool during the 1950s. Whether these businesses were based in the locations specified in the story has not been confirmed.

Frank's experience is not that unusual in the realm of strange phenomenon. There is even a name given to such events -- time slips.

A time slip is an event where it appears that some other era has briefly intruded on the present. A time slip seems to be spontaneous in nature and localization, but there are places on the planet that seem to be more prone than others to time slip events. As well, some people may be more inclined to experience time slips than others. If time then is the unmovable force that physicists say it is, why do some people have experiences that seem to flaunt this concept?

ABOUT THE AUTHOR
Tim Swartz is an Emmy-Award winning television producer and the author of such books as: The Lost Journals of Nikola Tesla, Time Travel: A How-To Insiders Guide, and Teleportation: From Star Trek to Tesla. Tim Swartz is also the editor of Conspiracy Journal, a popular e-mail newsletter of conspiracies, UFOs, the paranormal and anything else weird and strange.

Top: Bold Street in Liverpool seen here in modern times is according to urban legend a location noted for paranormal activity such as being transported back to the 1950s and 60s for flashes of time.

Lower: Dillon's on Gower Street in Liverpool was a bookshop and subsequently a bookselling chain, based in the United Kingdom, that traded between 1932 and 1999. Founded by Una Dillon (1903–1993) in 1932, Dillon's was for most of its history most closely associated with its signature building on Gower Street in London, near University College London, which Dillon bought out from a previously failing bookseller in 1936. She subsequently sold the company to the University of London in 1956. The old Dillon’s building is now a branch of Waterstone’s.