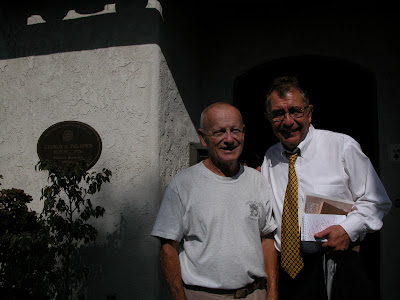 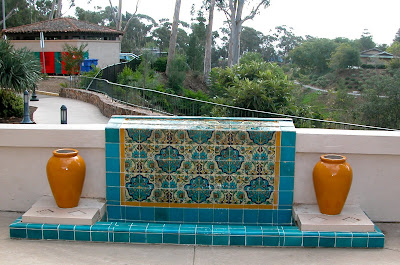 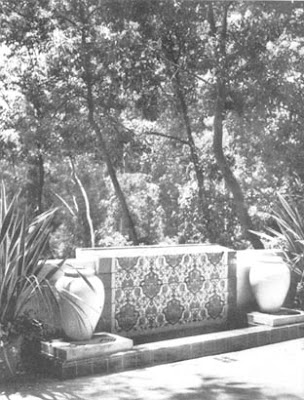 Created by architect Richard S. Requa, AIA in 1935, the fountain/sculpture is found southeast of The Prado’s patio dining area. Leading Requa historian Parker Jackson reminded me that Requa, was the Supervisor of Architecture and Landscaping for the 1935 Exposition. “The Water Rug's pedigree can be traced to ancient Persian gardens and palaces. The style is called 'chadar', which means shawl,” says Jackson.

If you face the fountain do a 180-degree turn and you’ll see the 1915 Botanical Garden across the park. The corridor between the two is meant to be a tranquil retreat for Balboa Park visitors.

When I do see Parker Jackson (I’ve written two articles on Jackson’s home, which was nee Richard Requa’s model home for a Kensington Tract), we often discuss the idea that a plaque should be placed near the fountain to alert visitors to its historical significance.

A few years back, Parker inspired me to the point that I wanted to recreate the Persian rug in my sideyard. My wife and I were dismayed that the lowest bid any contractor gave us was $35,000. The idea faded but it’s still on my wish list.

For an detailed article on the Requa public park rug copy the following Internet address in your search engine. A Jackson penned article should appear from the San Diego Historical Society’s superbly written “Journal of San Diego History.”
HTTP://WWW.SANDIEGOHISTORY.ORG/JOURNAL/2000-4/FOUNTAIN.HTM#JACKSON