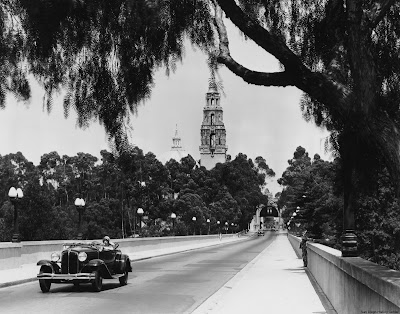 BALBOA PARK WEEK—This blog will spend the upcoming week in Balboa Park, one of the world’s great city parks to discuss issues and two upcoming lectures. Ever since City Park was renamed Balboa Park 100 years ago, the populace has been squabbling over numerous issues. On Tuesday and Wednesday there is a two-part blog that presents balanced reporting on the newest civic dust up regarding proposals to revamp the center of the park to be more pedestrian friendly. Obviously, there are more issues at hand however, the series “Battle of Balboa Park” does a very good job of defining the issues.

Today’s blog is on the Cabrillo Bridge. We go back into the first days of the bridge, when pedestrians were off limits. It seems we’re still fighting that battle. I wrote the following for San Diego Home/Garden Lifestyles and it appeared in the magazine’s November, 2011 issue:

Bridge over Troubled Mutters
What’s cooler than driving across Balboa Park’s Cabrillo (aka Prado) Bridge on a sunny day in a top-down convertible? To this day, generations of San Diego, whether we drive, bike, stroll or jog continue to enjoy crossing the famed local span.

Sadly, no one recalls the name of the young woman behind the wheel in the photo (above), but when we asked many auto buffs in town they recognized her ride as a 1931 Chrysler CD Eight Roadster. The San Diego History Center has put a 1931 date on the image. Said sources believe it was snapped as a promotional photo for a local new car dealership.

The big roadster was originally priced at $1,495 and was powered by an 80-horsepower eight-cylinder (“straight-eight”) engine. Chrysler stats showed a total of 1,462 were built that year.

Lately, automobile traffic into Balboa Park is big news as tempers and lawsuits have been flaring over a City proposal to create a diversionary roadway from the east end of Cabrillo (officially, the Prado) Bridge to planned parking areas south of the Organ Pavilion. The diversion plan is aimed at returning the Plaza de Panama (area in front of the San Diego Museum of Art) into a pedestrian zone. The jury is still out.

Meanwhile, the 120-foot tall span was custom built (cost $250,000) for the 1915 Panama-California Exposition and after its April 1914 completion pedestrians had sole crossing rights.

However, if you were a VIP, like then 1914 Mayor Charles F. O’Neill, you be the first to drive across it as long as Asst. Secretary of the Navy Franklin D. Roosevelt was also in the car. Lesser beings hiked across the bridge. In 1917, the City lifted the ban on vehicles and to this day San Diegans have been allowed to drive over the bridge and through Balboa Park’s woods to give our visiting grandma’s the royal tour. FDR returned in 1935, this time as 32nd President of the United States, to recross the bridge for Balboa Park's second Exposition.

Architecturally, the 120-foot-tall bridge is an early example of a closed spandrel arched bridge designed in the Spanish Colonial genre by Thomas B. Hunter and constructed under the supervision of architect Frank P. Allen, Jr.