TOP OF THE TANK/ MAGAZINE SAVED OUR BUNGALOW 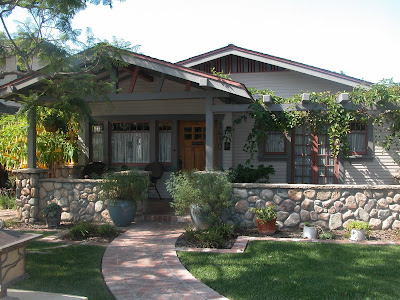 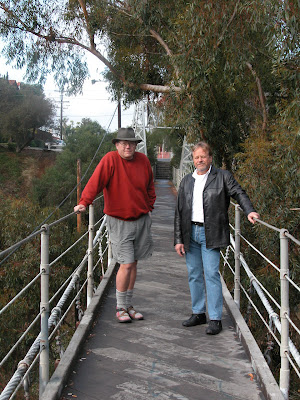 BUNGALOW ‘LOCOS’ UPDATE--American Bungalow Magazine saved our 1915 craftsman bungalow in San Diego from the clutches of a planned remuddlization into something more modern. An ardent San Diego bungalow historian (the late fine arts professor Don Covington) asked us as new homeowners what we had planned for our newly purchased home.

Eagerly Tom and Phyllis Shess shared every mid-century modern detail after all it was then just an old house that needed help. Ever the Southern gentleman, Covington nodded and softly mentioned that modernizing a bungalow with contemporary detailing and furnishings was akin to putting a mini-skirt on great, grandmother: “Yes, it can be done---but..”

Covington loaned them a copy of American Bungalow Magazine. "We had never read one before. After reading it (and later subscribing to it) we saw the light. We were not living in an old house—instead we were proudly owners of a classic Craftsman bungalow in a North Park community filled with homes built by many of Southern California’s master builders.

Brinkmann continues to flourish at the helm of his family’s three-decade, three generation icon to the Arts & Craftsman movement in the U.S. and Canada. Also, it is apparent his team has not lost its pioneering spirit as he’s created a new website called Bungalocals.net.

According to the site, “…Bungalocals is the place where American Bungalow's readers and their friends can share all that is authentic or unique to their area and the places they visit and discover.
“…At BungaLocals.net, you can contribute different kinds of content, including reviews, photos, events, votes, quick tips, private messages, and more. Our users provide the content, and the site is driven by what our readers contribute.”

There just a few rules. And they can be viewed at www.Bungalocals.net.

Thank you, Brinkmann Family for all you have done to preserve and encourage the nurturing of an amazing cultural phenomenon called the Arts & Crafts Movement. We look forward to participating in Bungalocals.net

Image: Photo of the “saved” 1915 bungalow, which made its proud appearance in the Winter, 2004 edition of American Bungalow Magazine. Also above blog photo of is of Alexander Vertikoff (left) and John Brinkmann during recent visit to San Diego. Photographed by Tom Shess, San Diego Home/Garden Lifestyles Magazine on the historic Quince Street Bridge, San Diego CA.

Top of the Tank is an occasional series on life in historic North Park, one of the nation's most diverse and architecturally significant neighborhoods with special emphasis on the Arts & Crafts Era (1890-1920).