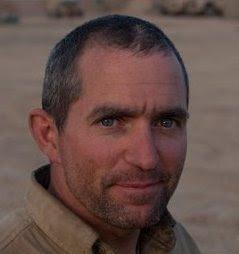 TRUE GRIT--New York Times war correspondent Christopher "C.J." Chivers, who is covering the Middle East war theatre with and his colleague Times photographer Tyler Hicks, has a personal blog that covers a lot more detail than his contributions to the NYT’s regular blog “At War/Notes from the Front Lines.” C.J.s blog is cjchivers.com

Chivers blog details his day job. But in a corner of his blog is a very dark room, where the ugly side of war is laid out without sparing the reader from the true realities of modern warfare. The title of that dark room is called “The Morgue.” In newspaper parlance, every publication has a morgue. That’s where past articles are stored for future research.

Chivers personal blog is as riveting as I’ve ever read. For the squeamish, be wary of clicking on to Chivers’ “The Morgue.” Subject matter there is chilling as a cold sweat bad dream.

C.J. Chivers is a senior writer for The New York Times, where he reports for the Foreign and Investigative desks, covering conflict, crime, the arms trade and human rights. His work also appears on the NYT’s At War and Lens blogs. He is a frequent contributor to Esquire, an occasion contributor to other publications and the author of "The Gun" (Simon & Schuster, 2010), a history of automatic arms and their influence on human security and war. The Atlantic and The Washington Post selected the book as a New York Times Editor’s Pick and a Best Book of 2010.