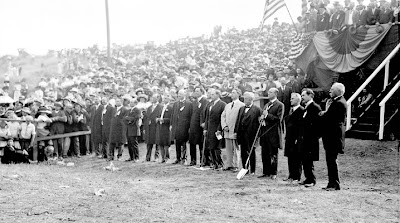 The four days, including parades, pageants and post-Victorian hoopla, all intended to focus worldwide attention to the marvels of San Diego as a place to prosper in the sun. City fathers knew that the 1912 opening of the Panama Canal was near. San Diego was a shoo-in to attract lucrative new commerce because it was the nearest U.S. Pacific-side harbor to the canal.

The 1915 Exposition in the newly named Balboa Park would be the clincher. With high hopes and low funds, the then Exposition Board gathered on July 19 with ceremonial shovels in hand. Today, the Expo shovel site is near where Interstate 5 zips under Park Boulevard.

Acting Expo director (local banker) Joseph W. Sefton, Jr., began the 10 am event--attended by a reported 25,000 throng--by handing a silvery shovel to President William H. Taft’s representative, John Barrett, Director of the Pan-American Union in Washington, D.C., a precursor of the Organization of American States. Barrett was followed by a lineup of civic leaders, who took turns digging in the dirt.

The booming port, envisioned 100 years ago never came to be as a commercial success akin to San Francisco or Los Angeles. Instead, important parts of San Diego’s waterfronts, would be reserved for the U.S. Navy, who found San Diego’s natural harbor a military asset, a place to base the ships needed to protect the new canal and to allow conversion of aging battleships into new “flattops,” where WWI-era bi-planes could land upon.

The rest is history.

Presently, a new civic committee is organizing a 2015 public fete for 100th Anniversary of the Expo.

Credits: The full text of this blog first appeared in the July,2011 issue of San Diego Home/Garden Lifestyles.