ALL HELL BROKE LOOSE—149 YEARS AGO 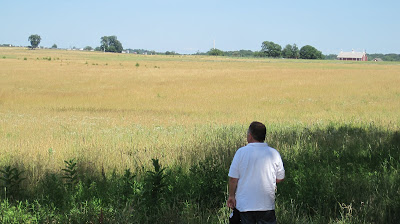 “The Civil War defined us as what we are and it opened us to being what we became, good and bad things... It was the crossroads of our being, and it was a hell of a crossroads...”
---Historian Shelby Foote


GETTYSBURG WEIGHS ON THE SOUL—Outside of my high school U.S. history class, I never paid attention to the War between the States, much less understand the deep fascination by others in the Civil War, especially what motivated those re-enactors, who dress up in blue or gray and spend the weekend bivouacking out in the countryside hoping to spot the enemy, a foe that has been departed for almost 150 years.

That was until last summer.

A recent visit to Gettysburg was a toss-in idea en route to visiting Frank Lloyd Wright’s famous Fallingwater, a Pennsylvania home the famed architect designed in the late 1930s.

Gettysburg proved to be the highpoint of our vacation.

Simply put, visiting Gettysburg battlefields was a soul-stirring experience. In the year since our visit I’ve read a dozen books on the three-day battle—July 1 to 3, 1863. I still can’t get enough of the stories.

At Gettysburg and other Civil War battlefields there are countless recollections of lost humanity and of patriotism beyond comprehension. Decisions made by generals on both sides are fascinating because of how those choices impacted the course of so many lives and the war. Second guessing those Generals has become folk art.

All in all, Gettysburg makes you shake your head at the waste of lives. Yet, through the sadness comes a message. The ghosts are saying: “learn from this. Learn to channel the passion of war into peaceful endeavors.”

Sadly, it seems we’ve ignored many of the lessons. We’re still a divided country. Red and blue instead of blue and gray.

But, when you stand in the fields of Gettysburg invisible hollow eyes stare you down. You are forced to believe we can do better for those generations gone and those ahead. Those of us alive today in America are so lucky. We live in domestic peace. Why must we divide ourselves with old hurts?

Later in the afternoon on July 3, 2011, I stood in the same field, under the same trees that Confederate General George Pickett stood prior to participating in a massive charge across a mile of Pennsylvania farmland.
It was a sunny day just like July 3, 1863. Corny as it sounds, I was close to tears.

I stood in the skirts of the battlefield, took off my baseball cap and said: “thanks.” Thank you was my Gettysburg Address.

On the way home, it was comforting to know organizations like Civil War Trust are buying up as many of these battlefields with donations from the public.

Why save the battlefields? You can’t answer that question until you stand where those men and women stood. And, saving the battlefields isn’t about making a playground for the legions of re-enactors. I have a new admiration for those folks who dress up in blue and gray in 2012 because deep down we’re wishing, hoping, praying that we could do something to make us remember our nation’s mistakes and perhaps ask ourselves why we can’t budge an inch toward compromise that would put away our differences so we can move on toward more noble work.

The late historian Shelby Foote summed up why Americans are drawn to the Civil War.:
“We think we are a wholly superior people. If we'd been anything like as superior as we think we are, we would not have fought that war. But since we did fight it, we have to make it the greatest war of all times. And our generals were the greatest generals of all time. It's very American to do that.”

Because of this remarkable public interest—more than any other clash-- the Battle of Gettysburg is the topic of an overwhelming number of books, articles, novels, films, TV shows and more recently websites and blogs. And, that’s only on the academic side. On the leisure aspect, tourism journals of every font have guides and how to visit articles on Gettysburg. Gettysburg need not be emotional. It is a fun tourist town as well. There’s plenty to do there year ‘round. Go early avoid the rush because the pendulum of attention is only going to swing wider in the next year when the famed Pennsylvania Battle turns 150 years old July 1-3, 2013.

Tomorrow’s Blog will highlight how we as Americans can do more to save Civil War battlefields and more on why.
[Other posts on Gettysburg appeared in a week long series November 27 thru December 2 in this daily magazine blog.]