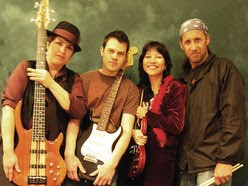 EVENT #1:
Kitten With a Whip (not to be confused with the Ann-Margaret 1964 flick of the same name) will be playing their alternative rock music and more at Bird Park Saturday, TONIGHT July 14th, from 5:30 to 7:30 pm. Judging from the huge turnout for the previous Bird Park Concert Series on June 30, we suggest getting there early and stake out your turf. Bird Park is at the southwest corner of 28th and Upas Sts. in North Park.

Kitten With a Whip is an energetic alternative rock band led by all-female band veteran Audrey Moesch. Formed in San Diego in 1995 by Audrey and then lead guitarist Mark Cover, its sound melds eclectic grooves of funk and world music to rock and progressive grunge to get its message across.

There’s something for everyone, as singer/guitarist Audrey composes such rousing, relationship survival anthems as “I Believe in Me” and angst-filled (6/4-timed) rocker “Monster” to the happy dance tunes of world beat-inspired “JuJu” and Latin-influenced “To Be.” Her influences include The Beatles, The Police, U2, The Pretenders and other female singer/songwriters like Alanis Morissette, as well as dada and Pearl Jam.

The group has performed at such top clubs as the Belly Up Tavern, the Casbah, and 4th and B and major events like the Rock ‘n’ Roll Marathon and the 1998 Super Bowl Festival at downtown San Diego.

Video of Kitten With a Whip in concert: http://www.reverbnation.com/kittenwithawhip
So check them out, come to a show, listen to their music and enjoy a one-of-kind experience of this dynamic San Diego indie band that’ll leave a tune stuck in your head or just make you feel awesome.

Come Out to Ray at Night this Saturday

Right after Bird Park concert come over to Ray at Night and enjoy new art by local and nationally known artists on Saturday, July 14th from 6—10 pm. Enjoy live music in the street and be sure to come hungry so you can enjoy fresh food from local food vendors!