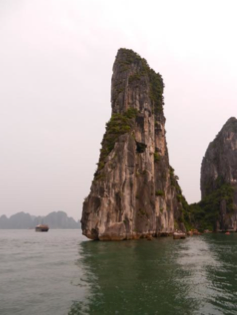 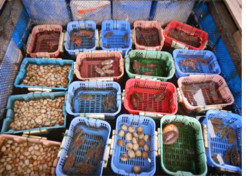 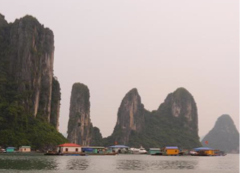 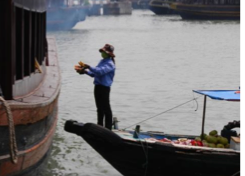 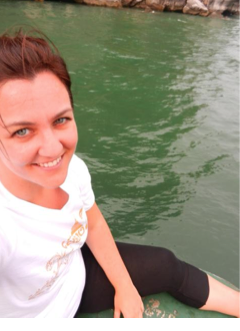 DAY TRIP OUT OF HANOI—From Hanoi I signed up for a day trip to the famed Ha Long Bay on the north coast of Vietnam. The bay is eerily beautiful. Picture a hundred mountain tops poking out of the sea and surrounded in a mysterious fog.

Apparently, there are sunny days here but I didn’t arrive on one. But when in Nome eat ice cream.

Hotels here work tourists hard to book one or two nights stay aboard a luxury yacht out on the bay. Traveling solo I felt it was a bit too romantic and decided to stay on land.

I did book one of the many tour boats. Passengers were a mixed bag, including tourists from U.S. (me), Canada, Hungary, France, China and a fun collection of Italians. Fellow boaters were fun. We had a few drinks served with some laughs.

This trip—like most in Vietnam—vendors were selling fruit and some more aggressive than others. But, I did learn the Vietnamese boat vendors are not beggars. They are very opportunistic entrepreneurs. You will always get something extra for your money. My bonus happened to be “luck.” By buying a can of Coca Cola I was told it would bring me good luck for the rest of the day.

Our boat tour stopped at a fishing village out in the bay. The islanders make their living on the water. They also had an island three room school, complete with school bags, pens and crayons and books.

We had a delicious lunch on the tour boat, mainly shrimp, fish and vegetables.

Back in Hanoi, I was still fresh enough for some nightlife. The hotel driver dropped me at a restaurant in town, where I dined on spring rolls and beers at a sidewalk table. The street was a bit secluded and dark at 10 pm when it was time to walk back to my hotel. Maybe it was the beer, but the walk didn’t bother me. Remember I had bought myself good luck earlier in the day.

Leslie Cruse is a hotel professional based in Los Angeles with W Hotels.