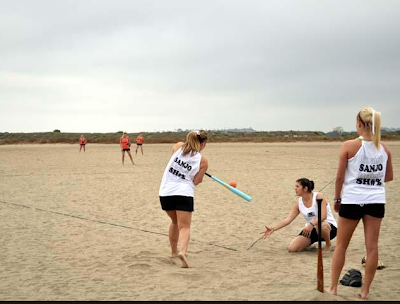 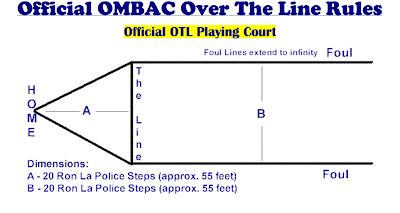 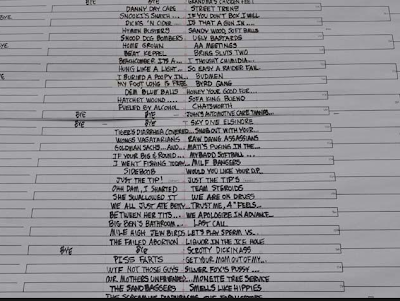 OVER-THE-LINE FOR DUMMIES and NON DUMMIES--Picture the shape of a one way street sign. That’s the shape of a beach softball game that was organized in San Diego 59 years ago into a yearly tournament that now attracts more than 50,000 participants and 1,200 (three-person) teams. It’s an adults only event held on an island in the middle of San Diego’s Mission Bay. It has to be one of the largest annual beach party’s in America.

One reason the event isn’t more widely covered by the media is because many of the spectators are uncovered, plus the real reason is simply that many of the participants pride themselves in giving their team the rudest name possible. The author of this blog played on a team for 22 years (1967-1984) and our name “The Runs” was by tournament standards was fairly tame. Our sons also played OTL under the name “The ReRuns.”

Everyone can watch for free but to play there’s a $90 per team fee. The proceeds go to the founding club named Old Mission Beach Athletic Club. OMBAC is a loyal sponsor of beach and non-beach related amateur sports. Despite their rowdy reputation, they remain among the good guys in town.

This year the tournament will be held over two weekends, July 14-15 and July 21-22 at Fiesta Island. Free admission. No babies, bottles or bad attitudes allowed.

The following is a YouTube video that’s somewhat dated but it does show the fundamentals of OTL—for that alone it is very well done
http://www.youtube.com/watch?v=SfyMaCAvsuo

Images:
Good looking team in the women’s division.
Over-the-Line Field Dimensions
Some of those routy names (we apologize in advance).