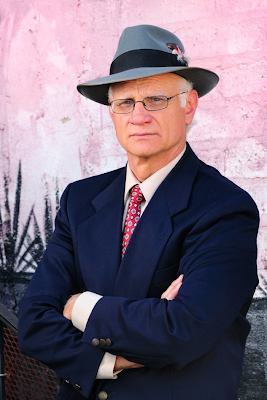 Writers come in all shapes, sizes, personalities and political outlooks. I wanted to write from the time I was a little boy, even starting a newspaper that my neighbors subscribed to (probably suppressing a grin until that strange Basinski kid left the porch).

I wrote for my high school paper and the paper of one of the colleges I attended. My degree is in English literature and I always considered myself a writer.

Yes, there was that little 35-year diversion into police work. Because cops write so much, I believe my education aided me as a cop more than a criminal justice degree would have.

It didn’t hurt that I was a touch typist who could bang out a report in half the time the other hunt-and-peck artists would spend at the typewriters (using carbon paper for copies). If you know what carbon paper is, you are old. If you know what NCR paper is, you are not as old, but still old.
Writers write because they love to. Most write for themselves, at least in the beginning.

I have spoken to writers clubs whose members have never sold a word and rarely even get a letter to the editor published. They don’t care. They keep on writing. Writers also write because they must. If they don’t write for a few days their skin itches and they are out of sorts.

Before I started at The Star-News I wrote frequent letters to the big local daily. They printed a few, but most ended up in the “Basinski Nut File,” probably because of a lack of political correctness and attempted humorous sarcasm.

When I was a patrol officer I used to write a weekly one-page missive called Dear Mom. The format was that I was writing to my mom in Michigan, relating things that went on within the department.

Naturally, I would only write about funny, embarrassing, off beat things, of which there were plenty. No one was safe, especially the administration. I soon had a reliable group of informants. I didn’t need to be present when someone made a goof. The informants would tell me about it immediately.

I would post Dear Mom on the bulletin board by the coffee bar every Monday afternoon. I could tell how popular a particular letter was by how many thumb tack holes were in it. People would take it down, copy it then put it back up.

Unfortunately, certain members of the establishment frowned on my efforts.
In spite of everything, Chief Bill Winters was sort of a fan. So, no matter how mad any captain or lieutenant became, the chief had my back — sort of. He didn’t get mad at me when I referred to his boss, the parsimonious former city manager Lane Cole, as “Lame Cole.” I think he even liked it when I referred to then Star-News editor Lowell Blankfort as “Lowell Blankthought.” The cops didn’t like the “Red Star” back then.

We had an official monthly police newsletter, The Blue Review. I wrote about an encounter I had with a black man who insisted I take a crime report about a civil dispute that was not a crime. The man accused me of racism for refusing to take the report. He demanded my name and badge number for the lawsuit he planned.
I pointed to my badge number, then my nameplate. He squinted and said, “Hmm. Ba-zin-ski. Das Pollock, ain’t it?”

I said, “You’re gonna sue me for racism, yet you call me a Pollock?”
With a sheepish grin he said, “Guess I done lost my case.”

The city manager at the time, John Thompson, took exception to that story. He phoned Chief Winters, who was on vacation, and complained to him. The chief stood up for me, bless him.

In the interest of peace and harmony I soon resigned and stuck to Dear Mom.

Originally published in The Star News, June 30, 2012 reprinted with permission of the editor. http://www.thestarnews.com/subscribe/

Tom Basinski, a former policeman, DA investigator and true crime published author, lives in Chula Vista, CA, where he freelances as a magazine and newspaper writer.