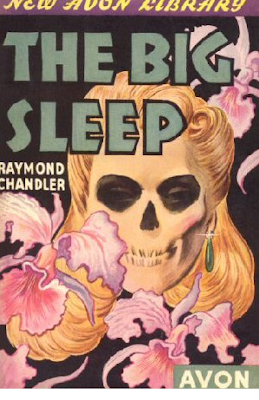 Note from Tom Basinski: Maybe one of the best-known author of detective novels is Raymond Chandler, who was born July 23, 1888. I’m no Chandler. But a few years ago the La Jolla Library held its “Imitation Raymond Chandler Contest”. I’ll let you decide if I should have won.

THE LADY IS A FAKE

Guest Blog By Tom Basinski--The noon heat cut sharp, making my throat feel as jagged as a young blonde’s after a date with O.J. Simpson. It was so hot you could fry an egg on the sidewalk. Any kind of egg sounded good to me because I hadn’t eaten today. My stomach was as empty as the “Ethics” section in a senator’s handbook.

I walked along the crowded 1100 block of Prospect in La Jolla, trying to avoid the shoulders, or what passed for shoulders, of yuppie guys on their way to power lunches; young punks sporting suspenders and goatees, their hair greasy enough to lube a Packard. Good looking dames bounced and jiggled along the sidewalk yearning to be looked at, yet prepared to sue if they actually were.

I’m from a bygone era and it hurts. After work these guys gather at a joint called George’s. They sip micro-brews and white wine at nearly a sawbuck a throw. Some stand on the patio puffing Cuban-seed cigars the size of nightsticks. Punks, all of them. I down bourbon, straight, then drag on my cigarette, hat pulled low, surveilling the scene.

I’m getting ahead of myself. Business had been slow. The drought ended and I became busier than the guy who operates the “bleep” button on the Jerry Springer show.

I paused in front of Victoria’s Secret at Prospect and Herschel, admiring their products. A beat cop with a neck like a telephone pole suggested I move on. He remained behind to gawk and stare at the mannequins, undoubtedly trying to figure out, or visualize, the meaning of the “Panties Half Off” sign.

I went inside the Prospect Center and located my new client’s suite. After scaling some stairs I walked through the door that said “Weber Enterprises.” The receptionist sat behind a mahogany desk filing her nails. Her main job seemed to be filling out the tight, red sweater she wore. She was good at her job. She had the kind of body that could cause cardiac arrest in a Kenyan distance runner.
“Do you have an appointment, Mister….Marlowe?” she asked, looking at my business card.

“It should be right there in your appointment book,” I replied, eyebrows raised, fake smile, nodding at the book in front of her. My tone was insulting and condescending and fortunately she took it that way. If there’s anything I hate, it’s wasted sarcasm. My barbs are too valuable to be lost on the dull.

She picked up the intercom phone, turning away from me. “Mr. Weber will see you now,” she said in a voice as cold as the paws of an Iditarod sled dog.
Weber didn’t waste words. “I want you to find this lady for me,” he said, handing me an ad from an adult tabloid.

I studied the picture.

It was of a beautiful, sultry, pre-operative (no missing parts) transsexual with pouty lips.

Weber didn’t realize she was really a man.

“Apparently you want the girl who has everything,” I said. “This one does.”

Originally published in The Star News, July 21, 2012 reprinted with permission of the editor. http://www.thestarnews.com/subscribe/

Chasing after Chandler
In honor of the author's birthday, former cop releases his take on the hard-boiled genre.

For an interesting history of the noir genre in crime writing click:
https://sites.google.com/site/noirfictionguide/