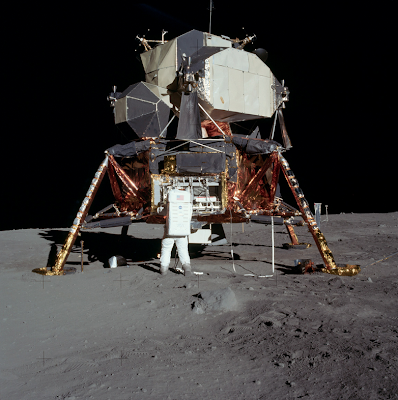 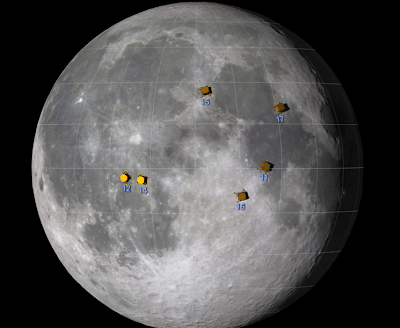 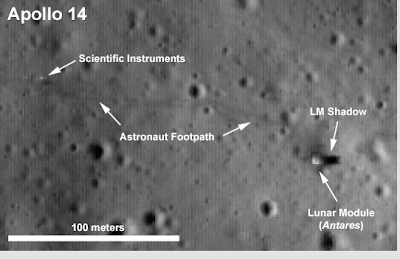 WHO WENT & WHAT WE LEARNED—U.S. Astronaut Neil Armstrong set foot on the moon on July 20, 1969 and in 2009 NASA’s Lunar Reconnaissance Orbitor (LRO) provided detailed imagery of the Apollo landing sites on the moon. One image of the Apollo 14 shows a close up (200 meters on the moon surface) of astronaut footprints between the LM and scientific instruments. Each descent stage is about 12 feet in diameter and stands 10-feet tall. The latter easily casting a shadow on the surface. The LRO is currently in orbit 31 miles above the moon.

Apollo Astronauts (in order of arrival on lunar surface). Ages as of 2011-12.


SMITHSONIAN’S TOP TEN SCIENTIFIC DISCOVERIES MADE DURING APOLLLO EXPLORATION OF THE MOON.

Mass is not distributed uniformly inside the Moon. Large mass concentrations ("Mascons") lie beneath the surface of many large lunar basins and probably represent thick accumulations of dense lava. Relative to its geometric center, the Moon's center of mass is displaced toward Earth by several kilometers.
________________________________________
10. The surface of the Moon is covered by a rubble pile of rock fragments and dust, called the lunar regolith, that contains a unique radiation history of the Sun which is of importance to understanding climate changes on Earth.
The regolith was produced by innumerable meteorite impacts through geologic time. Surface rocks and mineral grains are distinctively enriched in chemical elements and isotopes implanted by solar radiation. As such, the Moon has recorded four billion years of the Sun's history to a degree of completeness that we are unlikely to find elsewhere.