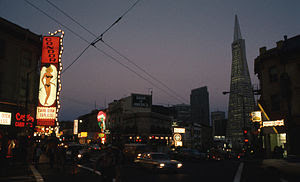 PUB FICTION—Powell’s Public House was one of those Frisco saloons, located in North Beach’s Little Italy. Because its owner John Wald was Irish, then technically it was a neighborhood Irish pub. It was Irish without being Irish. It wasn’t someplace, where tourists would flock on St. Pat’s Day.

Seated at a back table, Garcia grinned when he saw the off-duty Customs Agent park his car across the street. At nine in the morning, Powell’s was already full tilt. Wald ran shot-and-beer joint. No quiche, ferns or fancy mineral waters, but managed to attract an eclectic clientele spanning gutter winos on good behavior to three-piece suit yahoos.

Garcia remembered with a smile how Wald explained his clientele: From 6 am to 8 am it was cabbies and winos; 8 am to 10 am it was the tot lot for mom’s who dropped kids off at St. Peter & Paul’s school on the other side of Washington Park. From 10 am to Noon, it was the local cribbage and bar dice crowd, who left at noon, when the younger PR guys, media sots and the Willie Loman’s would toss them down with their secretaries. From 2 pm until 4 pm it was split. Mom’s would come in for an Irish Coffee and gossip fortifying themselves with Irish Coffee and gossip before picking up the kids from school. Around, three the waiters and bartenders at the North Beach eateries would come in to yak-yak about everything and nothing. From 4 pm on it was a local pub, the neighborhood pub that didn’t need a happy hour because the prices were cheaper by far then the trendy eateries that made North Beach famous.

He also recalled when Wald retired from the Fire Dept. to buy Powell's and also the apartment building that housed the pub.

Garcia felt like he hit the Daily Double at Bay Meadows track. He now had a school chum for a landlord, who happened to own his favorite bar.

Powell’s was the clubhouse for the school boys, a collection of orphans that attended the parochial school across the street. All, including the major, grown men in their 40s.

Sean had no idea the history of the bar he had just entered. He was hit by a steamy aroma of garlic mingled with the hot air coming out of the patrons. Powell’s in its various incarnations has always been a working stiff's pub, but Wald made it even more neighborhood by taking bad checks from cops and newspaper hacks with bum balances. He brought in street musicians and symphony-bred piano players work for food and drinks. And as gossip columnist once said in print, "...Powell's new owner steadfastly refuses to turn his place into a neighborhood cribbage den or a PR-hyped watering hole for tourists or self-important, low-watt literary luminaries who scribble romance novels for supermarket book stalls."

Sean sat down at the cabaret-sized table. Shannon the morning bartender and cocktail waitress greeted them.

“Is it too early for an Irish Coffee,” Sean asked.

“Only if you make it with a shot of Jameson’s.” Garcia said as he lifted a white Subway sandwich bag off the chair next to him and handed it to Sean under the table.

“Plain coffee is fine for me,” Sean smiled.

Both men admired the nicely rounded rear pockets of her Levi’s until she was out of earshot.

“We never did talk about money,” Sean asked.

“I think you’ll like the sandwich,” Garcia said, “I made an educated guess that you’d like roast beef.”

“I told myself the last time we did this dance it would be the last.”

“But my wife needs…”

Garcia put his hand hard on Sean’s forearm stopping him in mid-sentence. “I don’t want to know. I know she’s sick. It doesn’t matter. Use it you earned it.”

Sean looked away. He stared out through the plate glass windows into Washington Square. When he turned back he locked on to Garcia's eyes, “I’m not sure you’re going to like what I have to say.”

Source: Chapter is from a novel in progress.