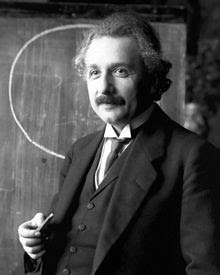 THE UNIVERSE AS A BLUR--Today is Albert Einstein’s birthday, a date he shares with my maternal great grandfather, which right away disproves my theory of everybody born on March 14, 1879 is a genius. Of course, in order to have a scientific theory you must explain it in a way only the discoverer understands. That is the theory of I got the cookies and you don’t.

In trying to understand both Einstein’s theories of relativity, I discovered that in every family there is one weird relative, usually a brother-in-law. Also, in my research for this blog episode I was able to understand Quantum theories, which means everyone is entitled to leap at the wrong conclusion no matter how simply or often it is explained.

Also, I discovered the universe of obvious constants. For example, today will always be Albert Einstein’s birthday. And, the laws of amazement are related to constants or constantly. Or as the late Groucho Marx might have said: Constantinople has nothing to with what we’re talking about.

Also, in a mental void confusion is an inherent right. But, it’s best not to over use this theory until it becomes law, which mostly will be in California when passed as a voter initiative.

Finally, for Einstein’s birthday we can all enjoy the theory of patent pending. If a train is speeding at you at the speed of light most likely you will miss it. But under the law of opportunity is found where you find it: Patent that train’s engine, now!

Happy Birthday, Mr. Einstein for allowing this blog to prove once more that if you don’t understand it—make fun of it.

Thanks to the American Institute of Physics you may hear a recording of Albert Einstein explaining E=MC2, which makes most listeners feel really dumb. Simply, copy the following URL and paste it into your search engine.