THE HAZE OF ST. PATRICK’S DAYS PAST 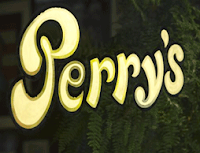 TIPSY NOSTAGLIA—OK, I’ve been sober since Halloween 1986 but I can still taste that Irish Coffee at Tom Bergin’s saloon in LA’s Wilshire District as if it were served ten minutes ago. Also, I wonder my O’Shess shamrock is still hanging up on the west wall. Will someone on Fairfax Ave. please check?

Another pub I loved crawling was Perry’s Saloon along Union Street in San Francisco. While living there as an Examiner reporter, I had a good saloon on each side of Russian Hill: Perry’s in Cow Hollow and the late, great Powell’s in North Beach. Perry’s front window table is still hard to beat on a chilly night.

Add Harry Caray’s in Chicago with my oldest son and Manhattan’s P.J. Clarke’s on my list of great bars, each with a fabulous history.

Across the pond, I had memorable Irish coffee’s at the London Playboy Club then there was the world’s most expensive martini at Harry’s Bar at the Paris Ritz hotel and a vin ordinaire seated at a small table near the stage at the Moulin Rouge. Check out the MR’s website for a fun time. http://www.moulinrouge.fr/ Ah, those Parisian’s. My investigative report from back stage was the dancers were all longer-legged Brits.

In Venice, cheers to the four Pan Am stewardesses from Frisco, who clinked flutes with me at the Danieli Hotel Lobby, only steps from the Grand Canal. We were all staying there, separate rooms, alas.

The highest I ever got on a glass of Champagne was aboard the Concorde at 60,000 ft. from London to Beirut. Lately, British Airways has a terrific tea service at 4 pm whatever cloud your Boeing 777 happens to be flying through.

The owner of Las Hadas resort in Manzanillo set up a white cloth row of tables to feed and Champagne a corps of travel writers on a bluff over looking a Pacific sunset. Hard to forget that Champagne and lobster.

Another sunset appreciated was with a bottle of local Panamanian beer on the fantail of a Royal Cruise liner through the Panama Canal. Gave a whole new meaning to lock and loaded.

While in Port Vila in the New Hebrides I shared a local punch rum drink after they saved me from drowning. Somehow, I had fallen out of the rented outrigger and fell into the lagoon. Flailing to find shore, the Kiwi couple merely pointed out: “Stand up, Yank the water’s only a meter deep.”

Speaking of Asia, I shared a gin and tonic with my imaginary friend Rudyard Barnett at the bar in the Raffles Hotel. He was curious why on earth I was wearing a wool suit in Singapore? Explanation: It was cold and wintry when I left Seattle. “The aroma of wet wool is unforgettable. You should get yourself to an Orchard Road tailor for something more equatorially suitable.”

And, as for my farewell drink, it was another flute of bubbles at the oyster bar at Pax Restaurant (long gone) in La Jolla, where my future bride suggested I’d be a great catch if I stopped drinking. Talk about Sophie’s choice. That glass of bubbly was my last. A decision and promise well kept.

Images: Internet from various websites, including the Concorde.