DID SOMEONE SAY CROISSANT BREAD PUDDING WITH MEXICAN CHOCOLATE & ALMONDS? 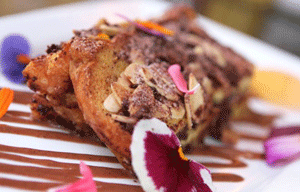 Editor’s Note: As we approach the 125th episode of this daily blog, readers have asked what’s up? Why are you doing this? Basically, there is no agenda to line pockets here with gold, instead it’s to share with kind readers thoughts, ideas, ironies, places, people that have impressed us over a long career in travel and magazine journalism.

For the example, the item that follows is really not about a personal passion for bread pudding but it’s more to salute the woman, who created such soulful recipes and restaurants in San Diego. If you haven’t heard of her before then you’ve captured an important reason why this blog exists. Isabel Cruz is a passionate cook. The establishments found on http://www.isabelscantina.com/ are worth visiting—not because they advertise here—but because you will walk away satisfied.

So, thank you for tuning in as you have. Now back to unbelievable bread pudding!

E-CLUB IS TASTY—Each week for the past two years the editorial team at San Diego Home/Garden Lifestyles has been publishing free weekly tips from top San Diego experts on Gardening, Interior Design and Top Chef Recipes. The roster on the recipe side is amazing. Kudos to SDHGL staffers Eva Ditler and Chris Galvan for making this feature such a hit with readers.

NO STRINGS FREE RECIPES FROM SAN DIEGO’S TOP CHEFS
Recently, the e-club tip sheet (sign up for free at www.sandiegohomegarden.com) featured a wow recipe from restaurateur/chef Isabel Cruz “Croissant Bread Pudding with Mexican Chocolate and Almonds.” Plus, she tosses another recipe for Mexican chocolate. Each week the e-mail blast offers EZ recipe tips like the one below.

Croissant Bread Pudding with Mexican Chocolate and Almonds
Serves 6-8
Warm and delicious, bread pudding is always a treat, even more so when it’s made with flaky croissants and cinnamony Mexican chocolate like chef Isabel Cruz’s version. Plan on serving this dish warm from the oven, if possible.

1. Preheat the oven to 350 degrees F. Butter a 9-inch pie plate and set aside.
2. Combine the eggs, half-and-half, and brown sugar in a large bowl. Whisk and combine.
3. Press the sliced croissants into the egg mixture and soak for three minutes, turning once or twice. They should absorb the egg mixture but not to the point of falling apart.
4. Fit the bottom half of each croissant into the buttered pie plate, sliced side down.
5. Sprinkle 1 cup of the Mexican chocolate over the croissants and then 1/2 cup of the almonds.
6. Layer the remaining halves of the croissants, sliced side down, on top. Sprinkle the remaining 1/2 cup Mexican chocolate and the remaining 1/2 cup almonds over the top.
7. Bake the bread pudding approximately 45 to 60 minutes until it is puffy and dry on top but still moist inside.
8. Remove from the oven and let cool slightly before cutting and serving.

Serve warm, at room temperature, or chilled. The bread pudding can be stored, covered, in the refrigerator for up to four days.

Combine the chocolate chips, sugar, and cinnamon in a food processor and pulse until finely ground. Store in a cool, dry place in an airtight container.