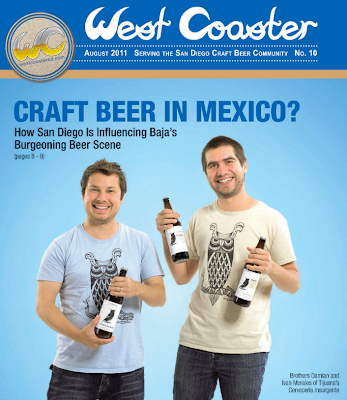 2 CULTURES COLLIDE—By collision we mean it’s a good thing as in accidentally running into each other. Saturday, March 3--if you arrange your stars--you can catch a beer tour to three Tijuana breweries by bus and/or take in the Yale Glee Club performance in Downtown San Diego. Doing both may be a bit iffy, but here you go. You decide.

Tijuana Craft Beer Tour:
Tour entrepreneur Derek Chinn is offering via his firm: Turista Libre, a tour of Tijuana’s lively craft beer scene Sat. at 1 pm. Meet at the pedestrian turnstiles on the U.S. side of the border. Cross over. A bus from the Mexico side will take tour-goers to Cerveceria Insurgente; Cerveceria Tijuana and Cerveza Agua Caliente.

Cost: Tour price is $45 per person, includes tasters at each brewery, www. turistalibre.com

Images: No future lawyers were injured in the taking of the Yale Glee Club promotional photo.

One of the breweries being visited on the Tijuana beer tour was reported on in the August issue of West Coaster. For articles archives go to www.westcoastersd.com