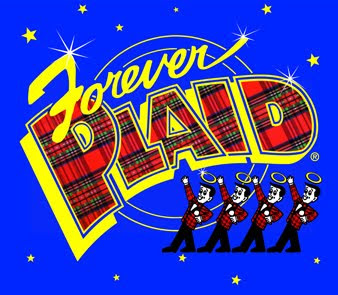 HEAVENLY MUSIC IN THE ‘HOOD—“Forever Plaid,” is an affectionate musical homage to the close-harmony 'guy groups' that reached the height of their popularity during the 1950s. This quartet of high-school chums, and their earnest dreams of recording an album, ended when the quartet’s cherry red '54 Mercury collided with a bus filled with schoolgirls on their way to see the Beatles' American debut on The Ed Sullivan Show. The girls were fine. The play begins with the wondrous and wondering Plaids returning from the afterlife for one final chance at musical glory.

The musical is popular staple in San Diego and will return to the Birch North Park Theatre on March 30, 31 and April 1. The Music and Theatre Company production features David Humphrey as Frankie; Scott Dreier as Smudge; Jeffrey Parsons as Sparky and Kurt Norby will be Jinx.

Because the Birch (29th & University) is a venue inspired and resurrected by a hard working North Park community bent on restoring this icon theatre to its vaudeville era roots (it has a six story fly for storing scenery), this blog will forever champion productions there.

As part of the community outreach, the producers of “Forever Plaid” are offering selected community schools and non-profits a piece of the box office for selling tickets.

An example of this teamwork is St. Augustine High’s Visual & Performing Arts will receive $5 from each ticket sold from the Saints community. If you’d like to see fun, live and professional live theater and help amateur productions at the same time type “Saints” in the promo code when you order your tickets online.

Three performances only. Plenty of time to book a reserved seat for only $20.