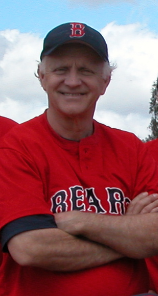 BIGGER TEAM COMES FIRST--Few are more zealous than an amateur baseball manager, especially if his team belongs to hardball league for players 55 years and older. The manager shepherds his Boys of Summer as they don uniforms and head out to rented high school fields to play the game they love. And, like all baseball teams, the key to success is quality pitching.

When Richard Haynie, an Air Force and Vietnam Veteran, joined the latter day bad knees bears as a pitcher, cheers went up along the dugout.

But as the team grew to depend on him, Richard would mysteriously disappear leaving teammates wondering, “where’s Rick?” It should be noted senior-age team absences are rare because these seniors resume the loyalty to the game they shared as schoolboys. Many would rather pass up a knee reconstruction operation than miss pitching a game.

So it was, the manager’s furrowed brow reflected his opinion of the perceived AWOL activity until he got the rest of the story.

Rick continues to miss games on occasion as it turns out for a very good reason. He puts his community service first. For the past nine years, he is a USO volunteer deployed at Lindbergh Field, where he greets young service men and women as they arrive at the airport.

He loves every minute of it. And, knowing where Rick is off to on the occasion he misses a game, it’s understood and cheered.

As a USO volunteer, he provides travel information to the local bases and arranges for shuttle pick-up to Camp Pendleton, North Island, Miramar and other areas. These fresh-faced and brave young people who may be away from home for the first time in their life constantly impress him. But he also meets many returning vets and those who may be leaving for repeated tours to faraway and dangerous places. It is a constant reminder of the sacrifices military personnel and their families make to insure the safety and way of life we so enjoy here in San Diego and throughout the United States.

If you have a couple of hours each month to spare you may want to consider spending it at one of the USO locations. The local contact information can be found http://www.usosandiego.org/

Note: Rick will be pitching today for his new team, the San Diego West Coasters at 3;15 pm, at the ball field located behind Silver Strand Elementary School (off of Leyte Road). Free. Plenty of stadium seats and parking available. Details: 619-846-0980.