LIFE AND WHIMPERING AFTER “THEY” CLOSED CALIFORNIA’S BIGGEST FREEWAY 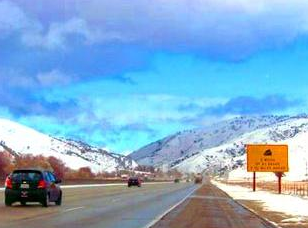 AVOIDING THE SNOWNAMI--Making good time south bound on Interstate 5 early Monday afternoon (Feb. 27) put us near the Grapevine area a little after 1 pm. Clouds were threatening the closer we got to the range of mountains separating the vast San Joaquin Valley from the Los Angeles basin, but we’ve seen that before. In fact, it appeared that the sun was shining on the Tehachapi Mountains.

Our hopes of making it through the range seemed excellent, as traffic in both directions was light. About five miles from the Grapevine area (home to a few restaurants and filling stations) we noticed a CalTrans electronic freeway sign urging us to turn to station 1640 AM for a travel advisory.

The wording surprised us because only minutes earlier we checked on our i-pad that I-5 was clear through the mountain range with only the possibility of a few snow flurries.

When we tuned in the radio station the CalTrans broadcaster announced that the passes through the Grapevine southward toward LA were snowbound meaning I-5 was closed until further notice. The voice went on to say travelers were advised to travel north on Highway 99 to Bakersfield and go east on State 58. From State 58 go south on State 14, which would put us back on I-5 somewhere south of Santa Clarita, just north of the San Fernando Valley.

As we hit the wall of backed up cars, trucks, & buses, we made the decision to follow the advice of the radio message and turn north to Bakersfield and take the alternate route. We were lucky in that we were among the first to hit the CHP roadblock. Even then we wondered if the snow delay was going to be shortlived. Do we be patient or keep moving?

But the benign looking clouds fooled us once. Then it didn’t seem like a snowstorm. We decided not to be fooled again and instead we headed north to Bakersfield and east over the Eastern Tehachapi range into the Mojave Desert. The ride through the mountainous part of State 58 was cold, snowing and very dangerous as 18-wheelers and auto traffic didn’t slow down. We got caught in a roll of traffic where the entire line was doing 80 mph through the snow! We managed to pull in between a few huge trucks that were only doing 60 mph. What are people thinking? Everything Easterners complain about clueless California drivers is true, especially those who speed in the rain, fog and snow.

Frankly, this San Diegan seldom sees snow, but when your life is flashing before your eyes the novelty wears thin. I was never more happy to see the desert…even if the temperature outside was in the low 30s.

When we arrived at the junction of 58 and 14, we decided not to take 14 south because in order to get to I-5 we would have to re-climb the coastal mountains that were white with snow. Not wishing to repeat the horror of another snowy pass (yes, I’m a wuss), we took State 58 East all the way to South on US Highway 395. We followed the dry dessert road until we reached I-15 at a point south of Victorville where 395 joins I-15. Now, at dusk we were engulfed in what we thought was a huge blanket of fog. It appeared like fog, but at 4,000 feet in altitude we were really traveling in a cloud. As we descended toward San Bernardino, we came out of the clouds and into a torrential rain. Funny it wasn’t raining above the clouds. ☺

Once on the safety of the Interstate, we had to make another quick decision whether to take I-215 via San Bernardino or go the longer way West on I-15 via Ontario. Both routes eventually would take us to San Diego.

We took 215. What a miserable mistake that was. I-215 in the rain is worse than 58 in the snow. I-215 is mostly two lanes in each direction and given the storm and the miles of construction along the way it was wet hell to put it mildly. We will always take I-15. Never again will we be tempted by the I-215 shortcut.

Finally, at 8:15 pm we arrived in our San Diego home just as the clouds parted and the moon shone brightly. The experience added about three hours to our trip. But at least we were moving all the way and not sitting in our cars waiting for the Grapevine passes to reopen.

Meanwhile back at the Grapevine, the CHP/CalTrans braintrust finally opened I-5 through the mountains on Monday evening at 5:45 pm after a six-hour shut down. Given that traffic would have been slow and monumental through the pass into LA, we were happy with our decision to take in the Mojave Desert as part of our journey home from the Bay Area.

LESSONS LEARNED: Listen to the radio traffic advisories, especially if snow is involved. Radio updates were of the moment, while Internet updates were tardy. Also avoid I-215 at all costs. Be patient and don’t speed through new fallen snow.

Because California is such a north south state, the weather patterns in winter change quickly. Succumb to the temptation to wander the beautiful off-season side roads of California in the Fall and Spring. Winter is now my flying season. Because the major airports in California’s big cities are near the ocean, the bad weather is limited to rain and occasionally fog. No snow. No de-icing and no whimpering.