ARCHIVE / LLOYD RUSSELL, AN ARCHITECT WHO GIVES A DAMN ABOUT RENTERS 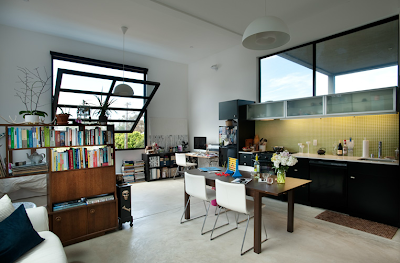 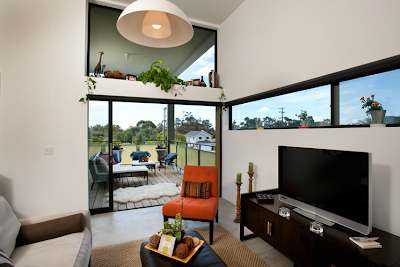 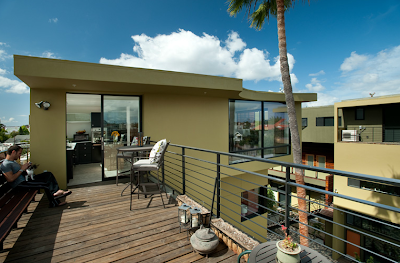 Editor’s note: The article below was written for this blog by Sofie Kinnefors as an intern project assigned by San Diego Home/Garden Lifestyles magazine. A companion feature about Lloyd Russell's award winning Centre City Lofts was written by Creative Director Thomas Shess and it appeared in the February 2012 edition of San Diego Home/Garden Lifestyles

GUEST BLOG/By Sofie Kinnefors--Lloyd Russell is a busy guy. Apart from teaching architecture with his mentor and fellow architect, Ted Smith at Woodbury College, Russell is working on several other building projects ranging from San Diego to Portland. He’s also working on adding awards to his office shelves.

The most recent added trophy is for a creative apartment project in Hillcrest.
Recently, the year-old Centre Street Lofts, near Robinson and Centre Streets captured an Orchid for architectural excellence at the 35th annual incarnation of the Orchids & Onions Awards.

“It is rare for multifamily projects to get awards, because when they look nice they are often unfairly compared to condos and custom homes that have larger budgets,” said Russell in his acceptance speech.

What impressed judges was the fact Russell built it at below market rate, yet the 25-units rent for much more than the market average. The popular architect (he also won an Orchid in 2010 for The Station Restaurant in South Park) has a winning formula.

He is the architect; the property owner; builder plus his team at Lloyd Russell, AIA, are tenant managers. By being all things, Russell’s mid-city lofts didn’t incur exorbitant additional costs.

The idea of making the 25 units rental apartment building was Russell’s. The architect has a strong belief that tenants are individuals and he wanted his apartments to reflect that. All 25 units have a different footprint. Russell also built them small (The largest is 1,200-square-feet) and made them appear even bigger by using outdoor space into the mix.

As a result, the smallest unit has an outdoor space that’s as large as its interior space. Tall ceilings, large windows, open floor plans and private balconies or patios create a far more spacious illusion than expected for apartments of this size. “This should be the norm for affordable housing in San Diego, not the exception to the rule,” said Russell.

Note: Architect Russell makes an important statement by proving rental units can be extremely beautiful and inexpensive. His lofts ended up being less expensive per square foot vs. public housing now being built. Public housing leadership everywhere might take note.

PHOTOGRAPHY BY AND COURTESY OF DAVID HARRISON: www.harrisonphoto.com/

Top: Finally an architect, who gives a damn about renters. This amazing architect is a master in style, whether it is residential or commercial. He’s been piling up accolades in San Diego for his fine work. This image is a studio and the only unit in the 25-unit Centre Street Lofts project that doesn’t have outdoor space.

Middle: Penthouse unit at about 1,200 square-feet with ample outdoor space.

Lower: Russell, as architect and developer and now unit manager is able to keep costs down. If I were looking to invest in housing units, Lloyd Russell would be my first call.

#1: To view more images of this project click www.lloyd-russell.com/

#2: Lloyd Russell was featured over the Mar. 2 weekend in the Los Angeles Times: http://latimesblogs.latimes.com/home_blog/2012/02/centre-street-lofts-san-diego.html

#3: On this blog read another story about Lloyd Russell's lofts via Tom Shess's article in SD Home/Garden. Click the top adv. box on right side of THIS blog home page.