DAY 5, Monday – Adios Cienfuegos, Hola Playa Giron, Playa Larga and Havana
Our intrepid troupe bade farewell to the wonderful La Perla Del Mar but not before we made three stops before leaving Cienfuegos.

Near to our hotel was a signless building on a residential corner.  Here goods can be purchased via the monthly ration card issued to every citizen of the Republic.  Shoppers may enter the front door and step up for the counter or use the side window that seemed to be a walk-up for daily bread purchases.

In downtown, Cienfuego off the beaten tourist path is a Mercado, a for profit marketplace selling food stuffs, mainly meat, poultry, fish, vegetables.

We are new believers that our tourguides Norkiss and Daniel saved the best for last came true as we made one final stop in Cienfuegos at the Benny More School for the Arts.  We were entertained with live music performed by students from grammar grades through high school.  All school costs are picked up by the State.
If you make good grades you are put on a path to free college, but if a student chooses not to go to college or doesn’t succeed in his/her grades that student is enrolled in a technical school to learn a trade.  Students at the Benny More school (named for one of Cuba’s most beloved balladeers, who hailed from Cienfuegos) are on the fast track.  Listening to their music prowess and viewing remarkable art work attests to the excellence of the arts programs in Cuba.  Many works of art produced by the teachers were on sale at the school’s art gallery.
ON THE ROAD
The southern countyside along the Caribbean is technically swampland and is one of the least developed areas in the country.  It doesn’t lack for  beauty, especially along the coast line, where small hotels make a good living catering to tourists (mainly from Europe), who enjoy scuba diving in the aquamarine sea.
By mid-day, we reach the village of Playa Giron on the eastern end of a large natural bay known internationally as the Bay of Pigs.   In Giron, the tour stopped at the historic Bay of Pigs Museum in Playa Giron, which gave us a Cuban perspective on the Bay of Pigs invasion.
After viewing the somber but interesting documentation of a failed attempt to overthrow Castro’s regime in the early 1960s, I exited to the lobby, where my eyes caught the sad stare of the Cuban guard, who was a similar age to me.  It was not my place to speak for anyone else but myself but I heard myself say “lo siento” to him.  He put his hand on my shoulder and repeated, “lo siento, lo siento.”  We were both sorry for what happened.  Then he smiled and I thought of what so many Cubans have said to us during our trip: let’s build a bridge over the past. We don’t have to forget what happened, but we can agree to move forward and not let the ugliness happen again.

From Playa Giron Hotel, where we refreshed ourselves with a mojito for the road, we made our way along the Bay of Pigs coastline to Punta Larga on the west side of the bay.  There next to picturesque Cienaga de Zapata National Park, one of finest bird watching areas in the world, we attended a lecture by one of the park’s naturalists. 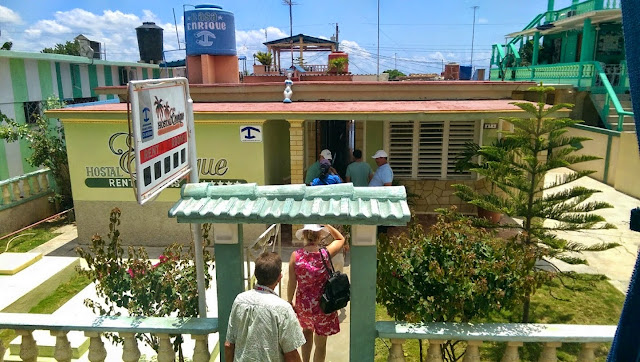 A leisurely lunch at Casa Enrique, a private residence and guest house was simply delicious. There we met the fisherman/owner of the hostel while the younger set in our tour went swimming in the Caribbean, a block away.
HOLA, HAVANA
After lunch we are on our way to Havana, the energetic 500-year-old city that we've all been waiting to see -- Cuba's distinctive capital has captivated the imagination of travelers for decades. A special dinner awaited at the Hotel Nacional’s famed open-air restaurant celebrating our late afternoon arrival in Havana. We were delighted to be staying at the most famous of Cuban hotels.

For many it was an early night.  For others they couldn’t wait to explore the nightlife in this intriguing city that shows herself best in the glow of night time lighting.


Dinner:  Creole restaurant “La Barraca” is located in the gardens of the Hotel Nacional, Havana