This classy highball is a Cuban concoction.  Legend has it that it was invented in a sidestreet bar in Havana.  The Mojito has routinely been presented as a favorite drink of author Ernest Hemingway. It has also often been said that Ernest Hemingway made the bar called La Bodeguita del Medio famous as he became one of its regulars and wrote "My mojito in La Bodeguita, My daiquiri in El Floridita." 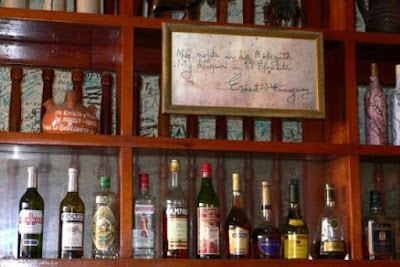 This expression in English can be read on the wall of the bar today, handwritten and signed in his name, although Hemingway biographers have expressed doubts about such patronage and about the author's taste for mojitos. Well, if it didn’t happen that way—it should have!
La Bodeguita del Medio is also a damn fine restaurant albeit worn and torn by decades of tourists, who insist in carving or scribbling notes on walls.
Our tour was greeted by a rum mojito everywhere we stopped.  It has become the “La Bamba” of drinks for those wily norteamericanos while in the tropics.
Mojitos are indeed perfect for the climate hot or cold because Cuba and Britain drink more mo’s than anywhere else, according to London’s Daily Mail newspaper.

DIRECTIONS
--In a Tom Collins glass, mush the mint with a fork to coat the inside.
--Add the sugar and lime juice and stir thoroughly.
--Add ice.
--Add rum and stir.
--Finish with the club soda.
--Add half lime and more mint to taste.
Serves one. 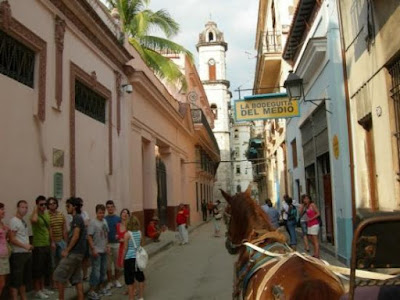