Bruce Henderson Photography
Editor’s note: On a daily basis from June 1 thru June 30, 2015 Pillar to Post online magazine is featuring articles, photos and insights resulting from a recent group tour, an adventure we dubbed: the April 23 Brigade’s Tour of Cuba 2015.

DAY 6, Tuesday - Havana
A requirement of any People to People tour to Cuba is a fine print task put into the tour contract.  The U.S. Treasury asks for a full documentation of daily activities to be put in a journal.  That journal may be viewed at any time during the next five years.  Our guides were firm on this requirement by gently reminding us every morning if we had written in our journal.

On this day, I share the entry by Phyllis Shess, United States citizen fulfilling her contractual agreement with the government to pen her day’s activities.  Yes, I am her husband, but as a career journalist I recognize good writing when I read it.

Every day we are asked to meet in the Hotel Nacional lobby at 8:30 am between the two grandfather clocks.  Before then, breakfast begins at 7 am in the Veranda Room downstairs, where this huge and chaotic place has breakfast stations set up serving fresh eggs, pastries, griddle cakes, fruit, meats, vegetables and coffee.  The buffet is jammed so much so that finding a seat is very hard the later it gets.

Our first visit off the bus was to one of two ancient fortresses at the mouth of Havana harbor.  To get to Fortaleza de San Carlos de la Cabana, we drove through the tunnel under the bay and found ourselves an hour early.  A later opening was due to parts of the fort being rebuilt.  But, we were able to take in the remarkable vista from the fort to Old Havana.  Unlike other city skylines, here you see very few new skyscraper because “new” construction essentially stopped in the 60s.  Nonetheless, it was lovely.
Skyline of Havana and the harbor from Fortaleza de San Carlos de la Cabana
Gary Payne Photography 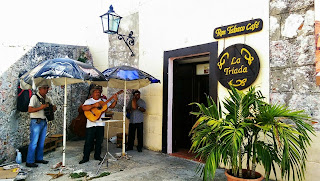 With time to kill, we discovered La Triada Tobacco Café, a small commercial shop tucked into the massive walls of the fortress, where the proprietor sold rum and cigars.

It was interesting to note among our group, the women were just as eager to buy Cuban made cigars than the men.  Seeing the varieties of cigars and noticing how they were rolled made for an interesting visit.

Moving back to Old Havana, we embarked on a walking tour with a young architect, who was involved careerwise in the challenge of restoring as many historic buildings as resources allowed.  Many of the buildings he and his cohorts saved were 17th & 18th century structures.  It was incredible to see the buildings which were restored compared with those next door that were falling to the ground.  It has been said that one does not walk under Old Havana balconies after a rainstorm.  Little did we know that we were a day away from a Noah like flood, when seven inches of rain would swamp Havana.
But for today, as we wandered through the more old than repaired buildings, we could only shake our heads at seeing how decayed these barely habitable structures were.  In one small plaza we saw four stories of jerry rigged outdoor electrical cords covering the building like jungle vines.  Even so, in a small space of that same building, a small three table (table cloths and real flowers in vases) café was awaiting customers.  Before we left the area the tables were filled.

As our young architect continued to lead us from Plaza to Plaza, we found ourselves tightly packed with residents.  They smiled at us—always gracious and welcoming—even if somewhat perplexed at what captures the photographic eye of an Americana visitor.  For example, I found a cat I had to photograph and a cart of onion and garlic by four men to that small café I just described.

At Plaza de la Catedral, home to the oldest church in Havana (maybe the New World), we could see why UNESCO chose Central Old Havana for a World Heritage site.  In the Plaza you see some folks in very elaborate and colorful traditional garb.  For one CUP (Cuban tourist Peso) you can take photos one or all of them.  One woman with her cat and cigar caught my eye and the image is my favorite trip photo so far.

A very hot day in Havana so lunch on a breezy hanging vine veranda at Hostal Valencia was a welcome break.  Daniel and Norkis called ahead to have the seafood paella “almost” ready for us when we arrived en masse.  No one complained about being able to sit in the shade and enjoy a ubiquitous rum and mint mojito.  [Mojito recipe will appear in this blog in later posts]. The paella was splendid as was the live music that seems to be everywhere we go.

At this point, I could tell my husband enjoyed his paella followed with a delicious café con leche (he will drink coffee in a lava flow so why should the heat of Havana be different).  Also, if left alone, we would have gone back to the hotel to put our feet up for the afternoon.

But, no rest for the turistas!  Though I think we were done in by the heat, our bus ride to the Muraleando Community Art Project was an incredible experience and definitely one we would have been sorry to miss.

Using the former site of a trash dump, a community of artists and musicians have created a vibrant and thriving community center.  Their energy has spilled over into the surrounding neighborhood.

Once again, we were entertained by a lively group of musicians with a beautiful young woman singing and dancing in 100 degree heat—no problemo.  She had everyone up and dancing.  Cuban entertainers seldom take no for an answer when pulling volunteers from the audience to get into the act.

Of course, there were several shops on the premises selling art, curios and clothing.  I purchased a remarkable mermaid that will look terrific in our San Diego home.

Our son, Michael, in the meantime was chatting with the group percussionist, who made a drum set from spare parts from the dump.

Meanwhile, back in the art gallery, I fell in love with several more gorgeous pieces.  I bought a colorful cat tile and spoke with the artist.  Knowing our luggage was going to be weighed on our return home is the main reason I didn’t come back with more art.  Not only was it terrific art—I was supporting a community art village and the prices were very, very low.

Tom, my husband, who sat in the back of the bus enjoying the air conditioning and chilled bottled water for the ride back to the hotel, was startled to realized there was ONE MORE stop on the day’s agenda.

Again, it was another on a long list of stops that we won’t forget.  We ended our day with a one hour Spanish lesson at the Jose Marti Language School specializing in teaching adults.  It wasn’t long before some of us were hamming it up with the instructor with our new found command of the language.  It was great fun even though we were definitely on overload for the day.

Tonight, turned out to be our Havana “free” night.  I opted out for the evening while Tom found a second wind as he and Mike decided to take a 1959 Ford Fairlane cab back to Old Havana to have dinner at Sloppy Joe’s, one of Hemingway’s haunts back in the 50s.  I learned later from a breathless description of the evening that Sloppy Joe’s was the site of the 50’s movie “Our Man in Havana” starring Alec Guinness and Noel Coward.  A movie none of us have ever seen—BTW.   Note: A description of boys night in Havana will appear Father’s Day June 21 in this blog’s Cuba coverage.

Back at the hotel, I totally enjoyed hot chicken soup in the hotel cafeteria, a hot bath and early bedtime.  Before lights out, I did have a chance to leisurely explore the vintage 1930s era hotel and experience the lush grounds.  There one of the hotel’s resident peacocks posed for me on the expansive lawn.  He turned circles for me so I could view his full splendor.

The boys were home by midnight and spent the last hour in the hotel’s Churchill Bar smoking Cuban cigars (at 5 CUC each) and enjoying Fanta orange soda and 12 year old Port.

It reminded me of the last Boys Night Out when both sons (Zac being the oldest) joined him in a night in Paris at Café Deux Magots.