Editor’s note: On a daily basis from June 1 thru June 30, 2015 Pillar to Post online magazine is featuring articles, photos and insights from a recent group tour, an adventure we dubbed: the April 23 Brigade’s Tour of Cuba 2015.

It might have been easier to chronicle the bars in Cuba where the iconic Mr. Hemingway didn't stop by to have a drink rather than document those that claim their spot was Ernesto’s favorite haunt.

For this blog, we stuck to the cliché bars, including those with photographic evidence.

Sloppy Joe’s—This old watering hole of the 50s was brought back to life this decade at its original location in Old Havana.  Reportedly Hemingway was the consultant to the producers of the 1959 movie “Our Man in Havana” starring Noel Coward and Alec Guinness.  In April, Sloppy Joe’s was booming and remains one of Havana’s most sophisticated bars that also serves food.  Location: Agramonte & Animas Streets in Old Havana.

La Bodeguita Del Medio—This popular bar is tucked away in the oldest part of Havana.  No doubt Hemingway drank here and if he didn’t he should have because his name is everywhere.  Including a framed quote saying Ernie preferred the Mojito’s here.
Location: Empedrado Street between Cuba and San Ignacio Sts., Old Havana. 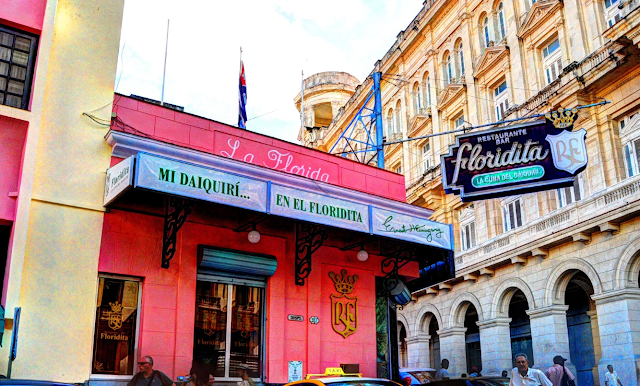 La Floridita (aka El Floridita)—The ace of the cliché Hemingway haunts.  So imbedded in Ernesto lore that this watering hole had a statue of the writer commissioned.  Part of the tourist shtick is to have your photo taken with Bronze Ernie at the end of the bar.  Lore has it the daiquiri was created here. Location: Obispo No. 557 esq. a Monserrate.  South, central downtown Havana.

Hotel Ambos Mundos—Here Nobel Prize winner, Ernest Hemingway lived while in Cuba until 1940 before he purchased his farm on the outskirts of Havana.  His room is a shrine and no doubt he drank at the lobby bar—albeit it doesn’t have much of a story. Location: Corner of Obispo and Mercadera Streets in Old Havana. 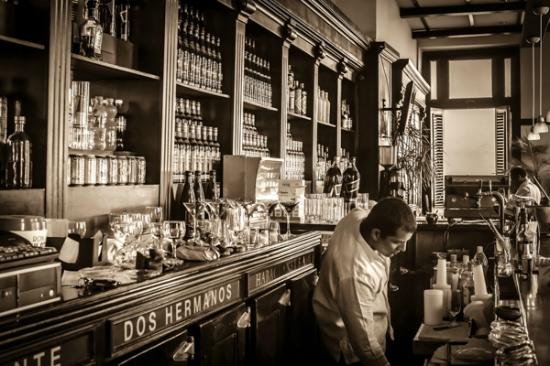 Dos Hermanos--Archivists of Hemingway insist he spent time arm wrestling with the Most Interesting Man in the World at Dos Hermanos.  El Dos is way off the Old Havana path of clichés, but claims to be the oldest bar in Havana.  It is very modern and comes off much like the bars along Green Street in the North Beach ‘hood of San Francisco.  One bonus: the locals love it.  Location:  Not far from the Hotel Nacional along Avenue Del Puerto (Malecon).


Hall of Fame Bar—Management of the Hotel Nacional de Cuba has been tacking to the walls photographs of its most illustrious guests since the day it opened in 1930.  Somewhere in the lobby bar—called Hall of Fame Bar—there is a picture of Ernest Hemingway.  More proof (100 proof) that this famed Moorish/Spanish Colonial style hotel was indeed a haunt of the illustrious American writer.  Location: If you can’t find the Hotel Nacional you’re not looking very hard.