DAY 3, Saturday Excursion to Trinidad
Morning visit to the delightful Cienfuegos Province Botanical Gardens, the oldest of its kind on the island, where we strolled among a soothing setting of palms, orchids, bamboos, and a myriad of other tropical plants.  I was fascinated by seeing what the trees that produced ironwood, ebony, cashews and brazil nuts looked like in a natural setting.

Continue to Trinidad, Cuba's best-preserved colonial city, with its winding cobblestone streets and pastel-hued houses, designated a UNESCO World Heritage Site. Highlights of the walking part of the tour were the Old (Holy Trinity) Cathedral and the Palacio Cantero, the city's history museum, housed in a restored Neoclassical palace.
After visiting the village square affording us a few minutes to shop.  Personally, I stopped at a small ice cream shop, which tasted terrific as the day was rapidly approaching 100 degrees.  Looking back, I was amazed how few tourists were in Trinidad, which is really a tiny town.  The vendors seemed to have the same array of crafts, linens, wood carvings and sometimes some leather goods.

From my gelato stop I located a street vendor selling Cuban cigars.  I purchased five short Cohibas.  Next was a fabulous lobster lunch at El Dorado, where we dined regally and listened to a talented quartet of musicians.

From the village square, we visit La Casa del Alfarero, a ceramic studio to observe a pottery demonstration and meet the owner Azariel Santander, whose staff explained the family traditions, handed down from generation-to-generation.

When the owner asked for a volunteer, several of us raised our hands because we learned early that the Cubans will not take no for an answer when demonstrating something they believe is important.

Back to Cienfuegos
We were grateful for our air conditioned bus as we drove back along the Caribbean to Cienfuegos.  En route, to downtown, we drove by the baseball stadium, which is home to the Cienfuegos Elephantes.  Season is over and the local team didn’t make the playoffs.  As a fan of the San Diego Padres, I totally understood.
We found downtown Cienfuegos alive with a semi-annual street fair, along El Bulevar (the main drag) we popped into nooks and crannies to see what was being offered.  Again, very little in the way of non-tourist oriented wares.  There were some clothes shops that did offer Cuban style shirts at fair prices.

Our walking tour continues (it is still blistering hot) to Parque Marti, the simple central park flanked by the provincial government building, Palacio del Ayuntamiento and the Arco de Triunfo.
Next, we ventured into the impressive Teatro Tomas Terry with its grand gold-leafed mosaics on the façade, embellished with Carrera marble and hand-carved Cuban hardwoods; in the past, this architecturally significant theatre has witnessed performances by Enrico Caruso and Anna Pavlova.

We returned in time to venture into the 1950s Las Vegas style pool next to the main hotel.  The pool water was the same tepid temperature as the nearby Bay.  The pool area was jumping with Euros, mainly French, Germans and Spanish speakers.  Americans were rare in this part of the trip.  We noticed the grins of surprise when the Trinidad residents figured out we were Americans not Canadians.  As we walked by we could hear muted voices repeating: “Americanos.”  I believe—call me Mr. Optimist--but our visit that day might have registered with the residents outside of Havana that changes were afoot in regards to Cuba/U.S. relations.

On the bus between towns, we noticed how small most of the farms were—at least by the two-lane paved road we traveled.  Most farmers were pushing plows from behind skinny horses or cows.  It made one think that if a tractor could arrive soon to where the farmers could share it—then so much more food could be produced.  If you want a statue of yourself in a Cuban village—buy them a John Deere—new or used.

Dinner this evening was at the “Lizard” aka Villa La Garto, a local "paladar" (a small, privately operated Cuban restaurant).

DAILY CUISINE ROSTER:
Breakfast.  The main buffet café at the Hotel Jagua was overwhelmed by its sold-out status.  We arrived at 7 am and were lucky to get a table in the large room.  Euro guests get up early.   The hotel made arrangements to have a breakfast buffet available for us the remainder of the tour next door at the Casa Verde, a sister hotel to La Perla.  The morning pace was much more relaxed.   The coffee machine was down, but I strolled back to the Perla’s bar for two café con leche to go and returned to my breakfast seat at the  Casa Verde.

Lunch.  El Dorado, a palador style restaurant along one of Trinidad’s main cobble stone streets served a steak, fish or lobster lunch.   Few of us strayed from the huge lobster portions. The meal was leisurely because the kitchen was a bit overwhelmed by another tour.  They made a fine café con leche and I was a happy camper.

Dinner.  A birthday surprise awaited my son and I at our dinner house, which was located at Villa La Garto, an other palador-style restaurant in Cienfuegos on Punta Gorda, just south of the Hotel Jagua.   By the way, Jagua is a tropical tree common in Cuba. 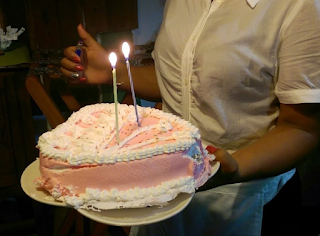 AHEAD TOMORROW:
Before returning to the April 23 Brigade’s Tour of Cuba 2015, we will pause for one day to discuss two 800-pound gorilla’s in the living room of every Cuban:

--Cuba in the Red.  Understanding the failing Cuban economic model, an in-depth report that answers a lot of questions.  Bear with me on this.  It’s a lengthy essay by the Council on Foreign Affairs and is solid background into to have on hand as we continue visiting Cuba.

--Quiet Man in Havana.  The politico that is being groomed to take over the country after the Castros.