When I first checked the itinerary of our nine-day trip to the Republic of Cuba, I noticed our one-bus caravan would be stopping at the Bay of Pigs, the site of an Anti-Castro armed invasion that took place in the spring of 1961.  The attempt failed: Cuba 1, US interests 0.

Because, the tour we were on was sanctioned by Cuba and USA cultural exchange entities, I wasn’t surprised.  Nor, was I looking forward to what I perceived would be a Bay of Pigs** propaganda lecture. 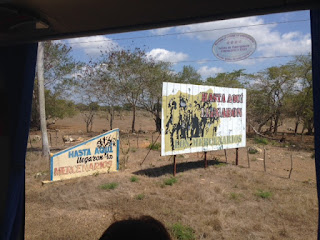 Monday afternoon was scorching hot as we neared the Caribbean village of Playa Giron.  For miles before through the south Cuba swamplands we read billboards saluting Castro’s revolution.  Reminded me of driving through South Dakota and seeing billboard after billboard announcing Wall Drugstore and/or the Corn Palace was ahead.

Playa Giron is a small village nearby to one of the largest wetlands in the world, the Cienaga de Zapata. It has a terrific hotel right on a pristine white sand beach, the same spot where the Anti-Castro militia stormed ashore. Down the street are rows of curio shops and the Museo Giron, a small museum dedicated to the historical conflict.  The beaches here are unpopulated by Caribbean standards.  Diving is a major draw to the area.
Our bus stopped in front of Museo Giron, where to my surprise, our guide offered us free time to visit the museum or wander down to the beach adjacent to Hotel Giron. Most of us went inside the air conditioned museo, instead of walking like mad dogs in the noon day sun to the hotel half-a-mile away.   Most of us did both, however as our bus parked by the hotel.

Like most things in my life when I prejudge I am often wrong.  Called kicking and screaming by family, I entered the museo and discovered an excellent historical presentation.  Yes, there was propaganda.  But, the photographs of the conflict put the 72-hours long invasion in perspective.  Grim reminders of why Cuba and USA relations remain chilly at best.  I’m glad we made the stop.

On exiting I found myself standing next to the security officer about the same age as myself (amazingly well preserved).  We were the only ones in the small lobby.  Our eyes met.  What I did next needs an explanation.  I do not for one second believe I speak on behalf of the American people. Nor, is it my place to judge who was right and who was wrong.   My sadness is simply that so many have suffered for so long.  I am sorry it happened. I don’t feel I’m alone in that sentiment.

But on this particular day at that particular moment of time and space I was alone with the guard inside the Museo Giron and I said to him: “Lo siento.” (I’m sorry).  He held on to his expressionless glance toward me.  Maybe three long seconds passed as he stared at me before he nodded and said: “Lo siento.”

Instantly, I went from figuratively kicking and screaming to experiencing one of the more memorable moments of our entire people to people tour.

** Why is it called The Bay of Pigs?  It appears it is a mis-interpretation of the Spanish name for the bay. The bay appears to have been named for a trigger fish that is common to the bay and the Spanish word for that fish is similar to the Spanish word for pigs. In English the translation comes out as pigs. 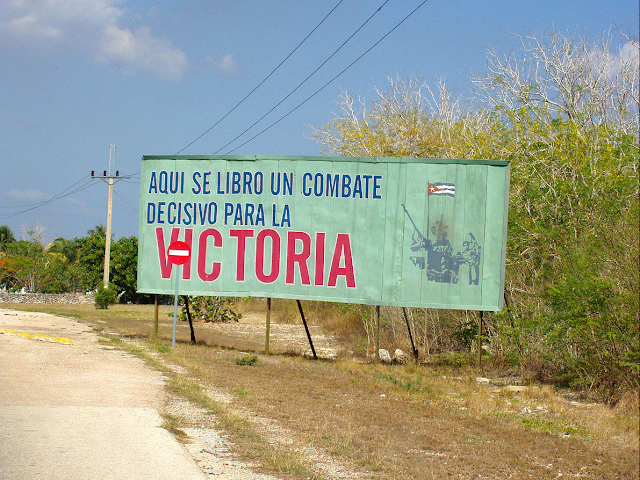